Jan Decorte has been using dance and dancers in his theatre productions for many years (a.o. Charlotte Vanden Eynde and Anne Teresa De Keersmaeker). But the written word was always the chief source for every project. In Tanzung, however, he is for the first time starting out resolutely from movement. During the rehearsal process, the actors Sigrid Vinks and Tibo Vanden Borre and dancer Taka Shamoto develop a range of varied material: movements, actions, sung excerpts and so on. Decorte reacts to all this with dance improvisations, with the motto ‘taking every movement seriously’. He has also written six poems about love in English.
Jan Decorte’s mastery lies above all in the simplicity he always manages to achieve in whatever means he employs. His linguistic idiom is stripped down and unlike any other. The principle underlying the structure of his productions is repetition, as is also used in rituals, in ancient Greek theatre and in Japanese Noh theatre. However, he never uses this structure as a rigid entity; his projects often emanate a beneficial lightness. 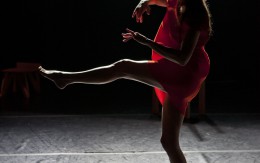 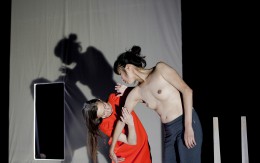